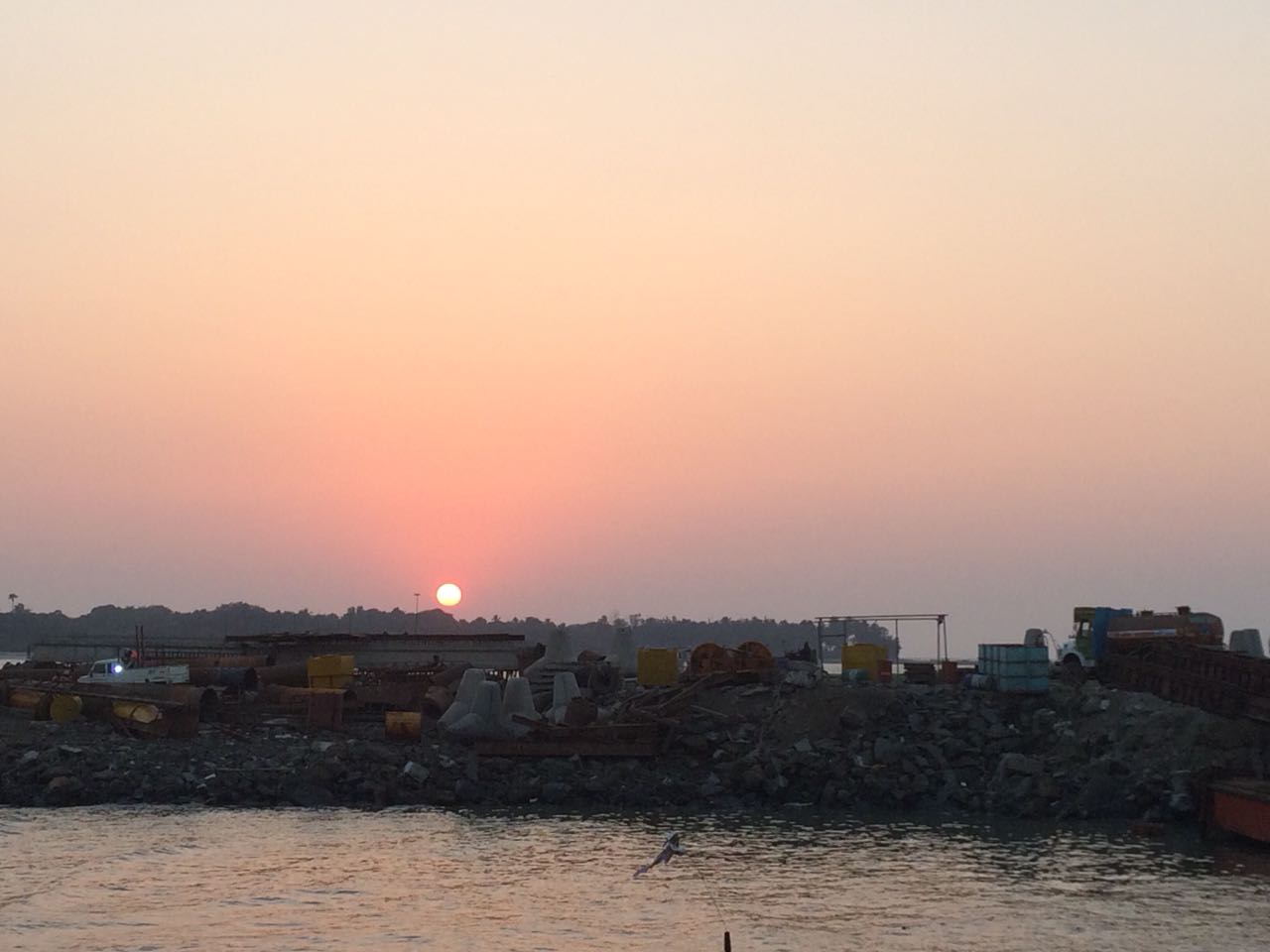 Most unusual trip so far

Some trips are just meant to be. They just manage to happen. Against all odds, against popular belief, against even common sense, they stand their ground. And once they actually materialise, they leave one with a feeling of unrealism even after one has actually been there.

The thought of 2 departments going together on a picnic is itself unusual, especially when traditionally, the 2 are traditionally at loggerheads. So when I first heard the plan of pediatric ot picnic with pediatric surgeons and pediatric anesthetists, I played along, sure that it would finally be shelved. The ambitious plan of flying/ driving/ boating to the white sands of Goa and staying at the home of the first DM pediatric anesthetist of the country was laughable, to say the least. And yet, against every bet I was willing to wager, the gem of an idea stood its ground. The chief proponent being head of pediatric surgery, I shouldn’t have doubted the feasibility of the plan, knowing Sir’s determination, but the human mind is quick to doubt, not accept.

Of course, the boat had to be rocked and many factors emerged to support my disbelief, including sky high airfares and inability to prolong the trip to a long road trip. Finally, Goa got replaced by her closer, smaller cousin Alibaug and now we were determined to find some hotel so as not to have the boat capsized. The quickest hotel search in my life led us to Bougainvillea and we paid the non refundable amount as fast as possible. The excitement amidst us reached a peak as we thrashed out the picnickers, the route, and the maal (Gujju food bag and poison). But the stress of planning was not to go. Till the last minute, we had unwell residents, drop out of chief sponsor, shut down of bridge en route and the sudden appearance of my sister who I most reluctantly left behind. And yet, like a stubborn spring bud, the trip forced it’s way through and how!

Finally the magical figure of 7 hopped into a Swift and a Punto, and made it to Alibaug in 3.5 hours, despite delays by the prettiest one (naturally with too much luggage), petrol fills, traffic snarls, lunch at MacD (Yuk!) and a desperate tea break by one driver (yours truly). 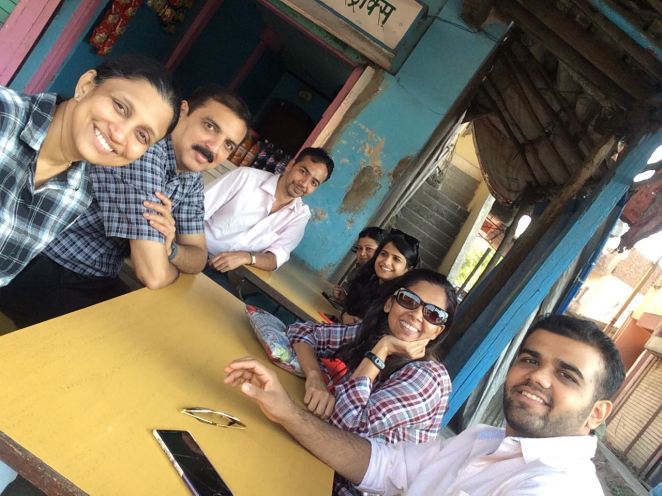 What’s with tilted pics and the new Gen?

Did I forget to mention selfie sticks that dropped phones and failed to fire? Yep, that was part of the fun too. At the small but charming Bougainvillea, we rushed to the beach, desperate to catch the sunset (me), desperate to be back at the room quickly (the boys). And happily, roamed about on the black sands, on a beach with no one else about, akin to a private beach. Fabulous! 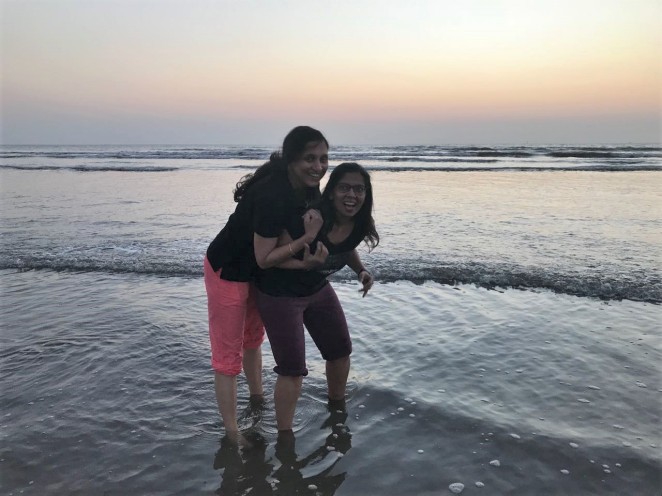 Proof of surgeon torture by anesthetists. Imagine what happens in OT! 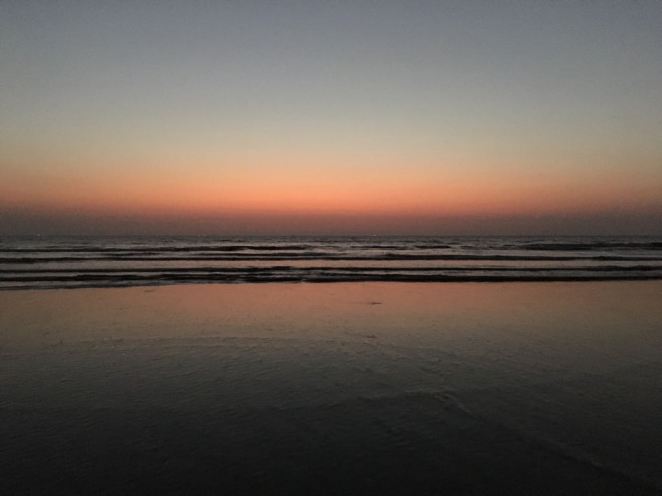 The sea and sand had whetted our appetite, and it was time to party. After all, motto of the trip was, “Wine se kya hoga boss?” and “gham ko bhulana hai”, then proceedings had to go on in the correct direction. What we didn’t account for was dumb charades with a little more than wine, and internet available to a select few only. The opposition team decided to smash the surgeon and lone bechara anesthetist team by targeting me with hindi films. Needless to say, we won because of bechara anesthetist. 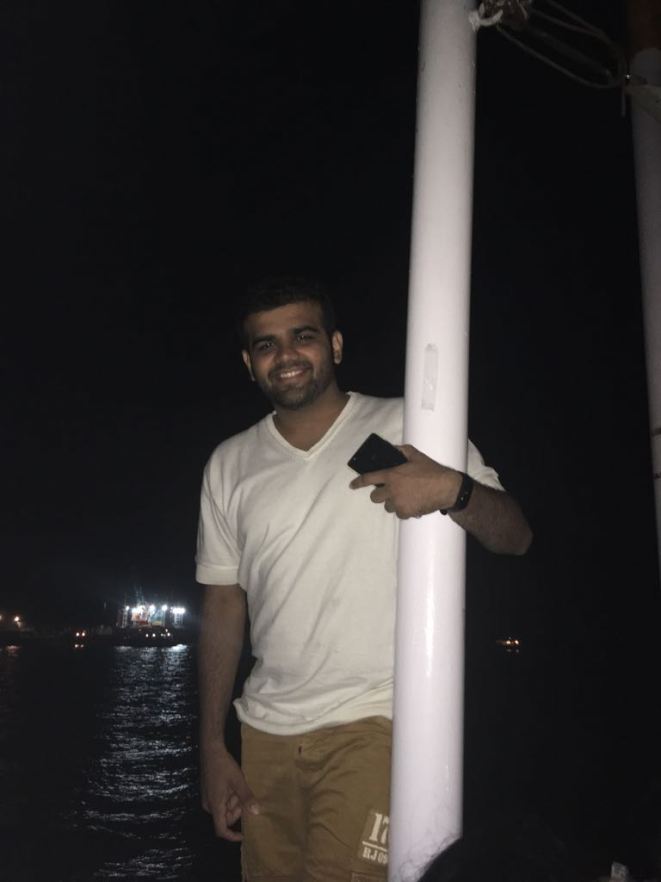 We woke early the next morning, with aching sides and facial muscles from all the laughter, and headed to the beach for a morning run on the clean sands of Nagaon beach. The sun was just rising, the mist rolling in from the sea and the waters receding. Lovely morning to be up and about. 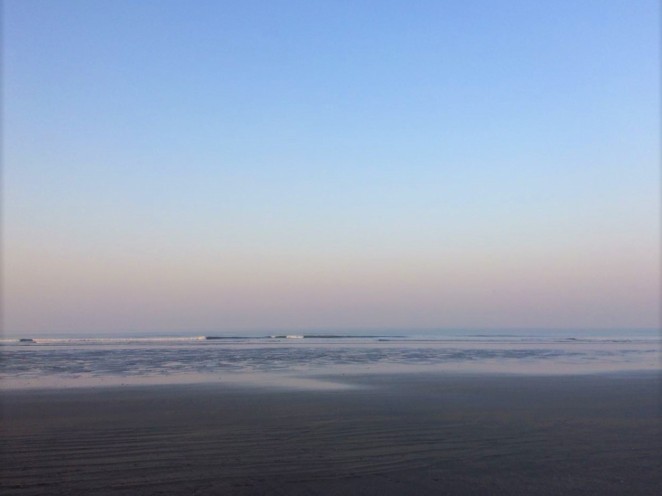 A quick breakfast led us to the nearby Kashid beach with golden yellow sands and watersports. The beach early morning was a dream, with soft sands and clear waters. The first thing I did was run into the water and splash all the coy women around! 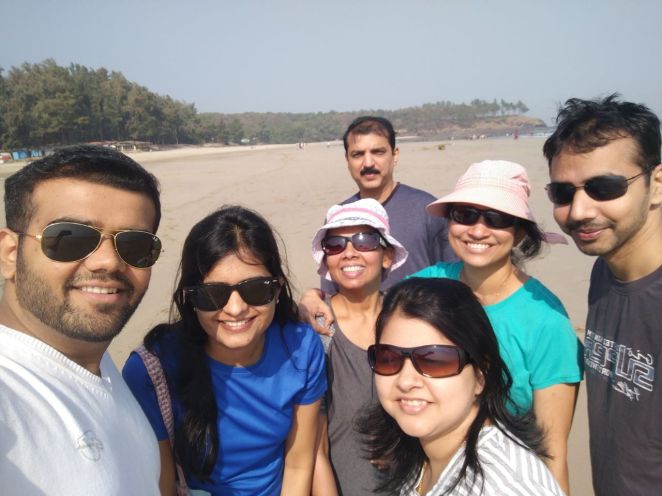 See the dream team and their cheeky grins!

But the best part of the morning was to swim (actually swim) in the beach. I am never allowed to go deeper than my knees into the water when family is around, so this was a golden opportunity, helped by the reckless “dream team” of Harick and Ketan. So, I plunged headlong into the sea, wondering if the next days headlines were to read about the tragic deaths of young doctors! Pushing away morbid thoughts, I enjoyed the waves, till, surprise, I saw boss swimming alongside! Awesome. The dream team had 2 converts now. Later on, boss confessed that this was the deepest he’d been in a lot of years too!

Such a blast was to be had in the waters, that we might never have come out, when a big wave pulled me off my feet and shoved me into the waters. I came up spluttering out sea water, sans my sunglasses. Oh no! My second eyes! I had been warned by all to take them off, but I had refused to, as I am blind without my glasses. There I was, blind again, groping about in the waters. Everyone started palpating the waters, knowing that this was a search in vain, when suddenly, boss did the most amazing “blind” foreign body retrieval ever. He got my glasses! No wonder he’s the king of FB extraction!

We swam so much in the waters that there was very little enthusiasm for water sports and the boys wanted to be back for fuel. So we (reluctantly in my case) left back for the hotel, emptied buckets of sand in the bathroom, and had a wonderful lunch in the hotel itself.

The evening was planned for sunset at the Boardwalk at Mandwa jetty, and we sure dressed up for it. All except the dream team, who landed up in their trademark shorts. So much for style! Needless to say, Barkha took the longest to get ready, but those red shoes were worth the delay! 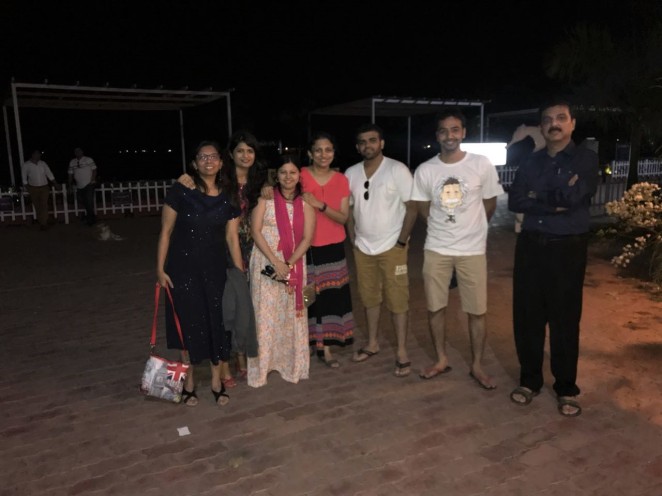 Note the red shoes and the awfully underdressed dream team

We were keen on seeing the sunset at the jetty, but that was not the best part about the Boardwalk. Great food and great music were the main factors, and after sunset, the lack of people along with great retro music and cool breeze blowing over the waters, made this one of the best evenings out. And the spirits, needless to say! 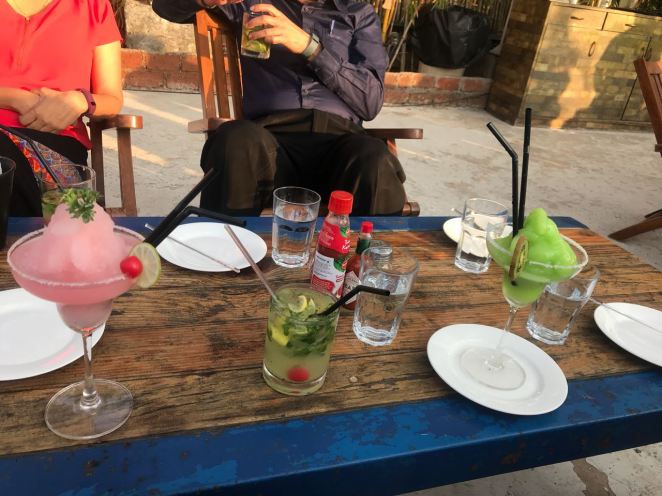 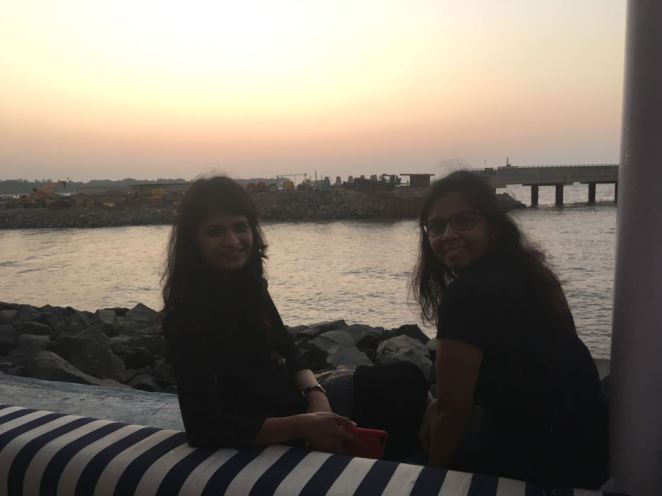 We need our kattas everywhere

Oh and the people around too! 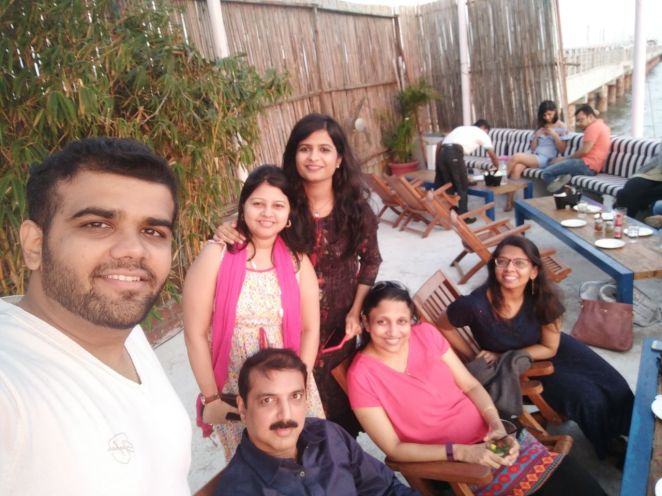 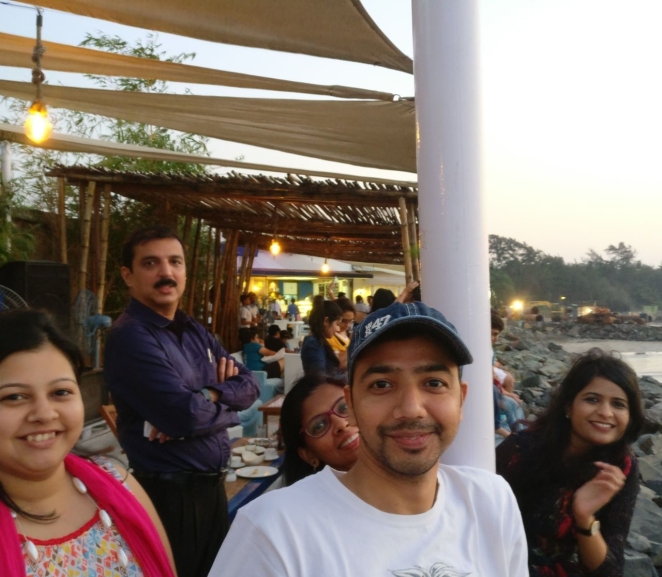 Magical as the sun went down

Thanks Priyanka for a super great treat. Soon, we were back at the hotel after a harrowing drive in the dark, when we realised that Harick had a lot more to drink than he should have when he was designated driver without a functioning speedometer. Round 2 of a great evening, and crazy laughs made for a grand evening; one of amazing realisations, such as Harick being in 9th grade when Sir became HOD, and dreams and aspirations of our dream team. The laughter continued late into the night, as we all got madder and funnier, fuelled undoubtedly by the good snacks and drinks, and the music tracks that kept changing, courtesy DJ Barkha and Harick.

The next day we were to leave, and everyone’s reluctance showed. Madam insisted on playing Pictionary as she had carried it so far, so we plonked ourselves on the charming green-fringed covered rooftop (regretting that we weren’t here the previous night) and played, laughing till our throats hurt. This time, Sir was the clear winner, and Harick and I soon learnt that it was easier to guess looking at his pictures. 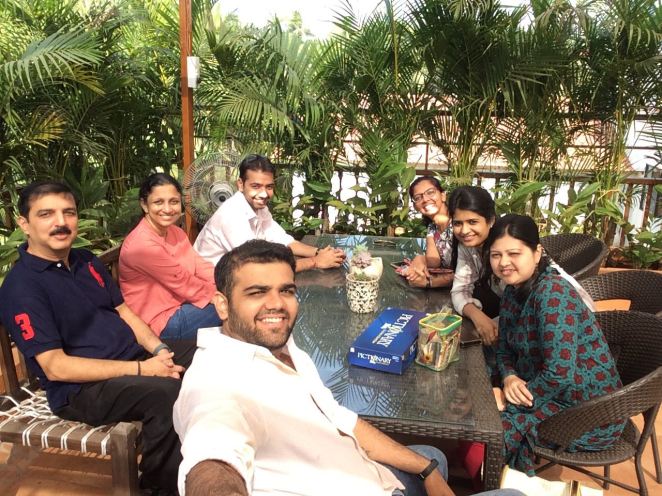 But the killer diagnosis was by Barkha of my dinosaur-like turtle. Reluctantly, we wound up and left our holiday, knowing that work was due the next day, and drove back through massive traffic. The last bit of fun was to be had over missal-pav lunch, that we had been craving since we set out, and finally, we all bid adieu to each other.

P.S. It’s more than a month since we are back, and we are still laughing about the trip, collecting seed money and making plans for the next one. But this will stand out as the first and the almost not-been!