One more lake. Yes. This time, the most popular and nearest lake to Gangtok, and one enroute Nathu-La Pass, located at Indo-China border. The main aim today was to reach Nathu-La, where we would encounter snow, and hopefully play in it (kid was vigorously shaking her head). We were to go on our first day in Sikkim, but couldn’t as the road to the pass was closed because of heavy snowfall. So we (read hubby) were determined to go today, irrespective of the road.

The previous day had been bright and sunny, so I was hopeful, but in the morning, it was very cloudy at Gangtok itself. Since our permit was done, we decided to go. It was later that the agent dropped the bomb that we would be stuffed in a Bolero with 10 other people from the lake to the pass, due to restrictions on numbers of vehicles allowed, and not in an exclusive car. No amount of explaining, begging, showing terms and conditions of the trip, would work. So, we decided to grin and bear it.

This ascent was much sharper and faster than the others, with a beautifully tarmacked, broad road, that could easily accommodate 2 vehicles side by side. The hubby and I were stunned. Maybe this was well maintained as Nathu-La was an important India China border. Not like we were complaining. We were tired of being flung about.

Within 15 minutes of leaving, it started raining heavily. Visibility dropped to rock bottom. We could barely see 20 meters ahead. I was stunned that the car didn’t roll off the road. The curves were sharp and tall and just couldn’t be seen. It was the scariest drive of the trip.

I held on tight to the hand strap of the vehicle, praying nonstop. Nothing could be seen in the valley. The driver suddenly halted. Squinting, I barely made out the brake lights of the car ahead. Now for a while, the road was less scary as there were the lights of the car just ahead to follow, but at some point, he sped off (What! Was he crazy?) and we were again on our own.

The view on our way!

This was the point where I was seriously impressed by the Sikkimese drivers. They were so used to this route and this unpredictable weather that they could maneuver in this awful state, though I confess that the driver and the hubby were scared too but just didn’t show it.

The view of “the valley”

Rain lashed at the windows and the windshield. It was very very cold. But the chill I felt was more due to fear than the actual cold.

There was no way for us to know where we were and how far we were from the lake or Nathu-La. I had more than half a mind to turn back. Suddenly we stopped. The driver told us to get gum boots and snow jackets from some shop by the roadside that we could barely discern. We ran in through the rain, shivering like crazy.

Some color on a bleak route

It was wonderful to get on a snow jacket, as it instantly warmed us up, as did some tea. The respite in this dark and dinghy shack, from the rain and the incessant curves, was certainly welcome, as were the goodies in the shop.

After half an hour, we reached just short of Changu. There was a HUGE queue of vehicles all waiting behind the other. By then hail started falling. Tiny balls of ice started bombarding the windshield.

Notice the hail on the windshield

Our driver spoke to some people and said that the road to Nathu-La was closed because of snow fall. He said we couldn’t even go to Baba mandir, a short distance away. He didn’t even want us to go to the lake as he was worried about getting back. But there was no way that we had come all this way risking our life and were not going to the lake. So, we got off in the pouring rain and hail, amidst the slush, and walked to the lake.

“Lake? What lake?” asked the kid, as we walked to the anticipated site of the lake, where all we could see was swirling fog. We walked slowly over the melted snow and yak excreta (grateful for the gumboots) and suddenly stopped at a low wall with gaps in between. Beyond that was the lake. Anyone could easily fall in! 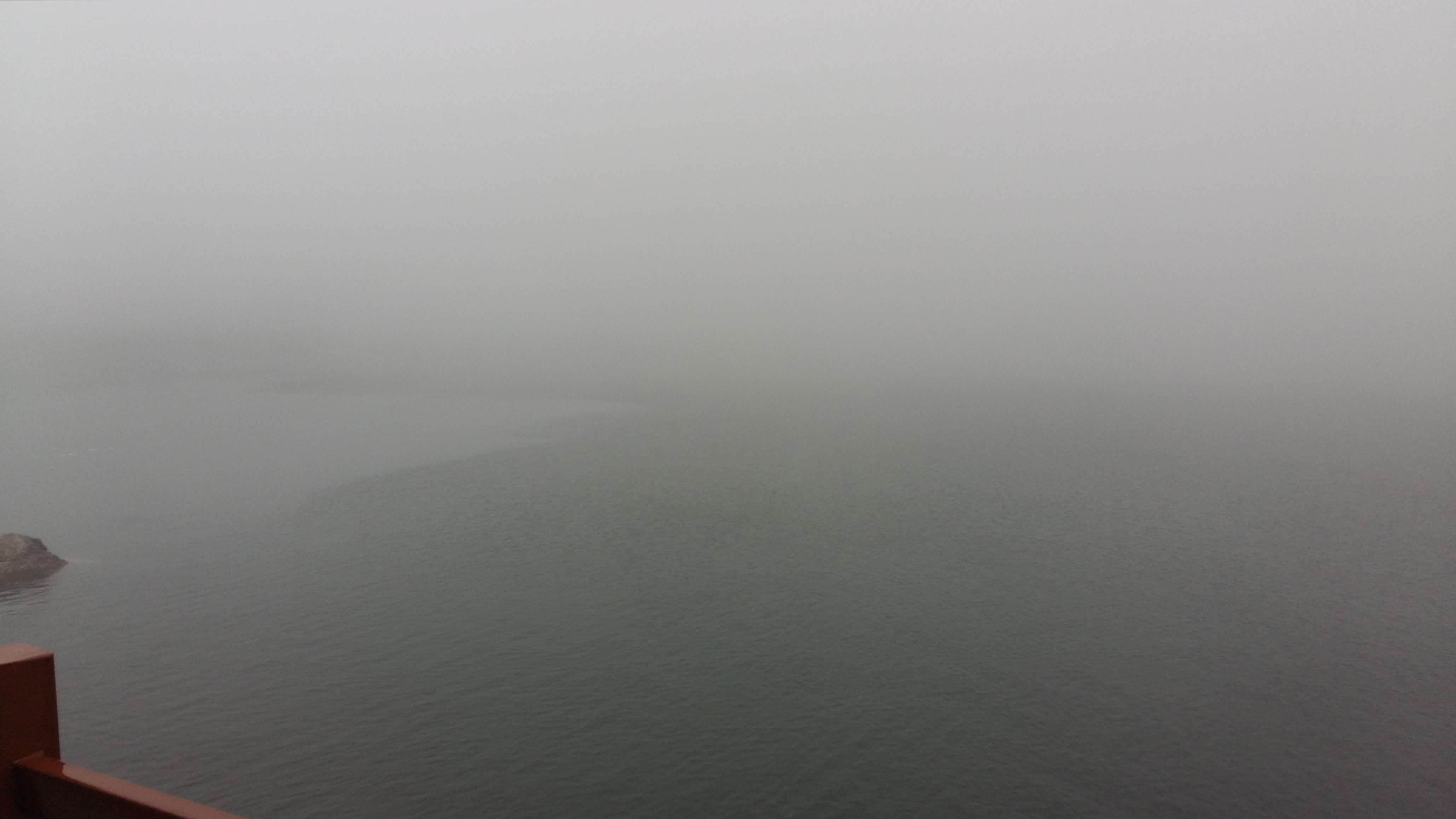 It was so cold that my feet were freezing through 2 layers of socks and gum boots and I kept lifting one foot and then another to avoid getting frozen. But it was great fun. We had never stood in hail like this before, where it was pelting us, and no raincoats, umbrellas or snow jackets were protection. The three of us actually jumped and threw our hands about in joy!

We walked on, savoring the weather, when we noticed a raised area with snow.

Snow to play in!

The kid had finally realised that it was the muffler around her neck that she couldn’t tolerate, and had refused to wear it today, which is why she had a great time. It might have helped that there was only 10 square feet of snow as opposed to sheets of snow over mountains.

While we were stomping about in the little patch of snow, the hubby suddenly cried out, “Turn around.” The fog had lifted partially and magically, we could see the lake. 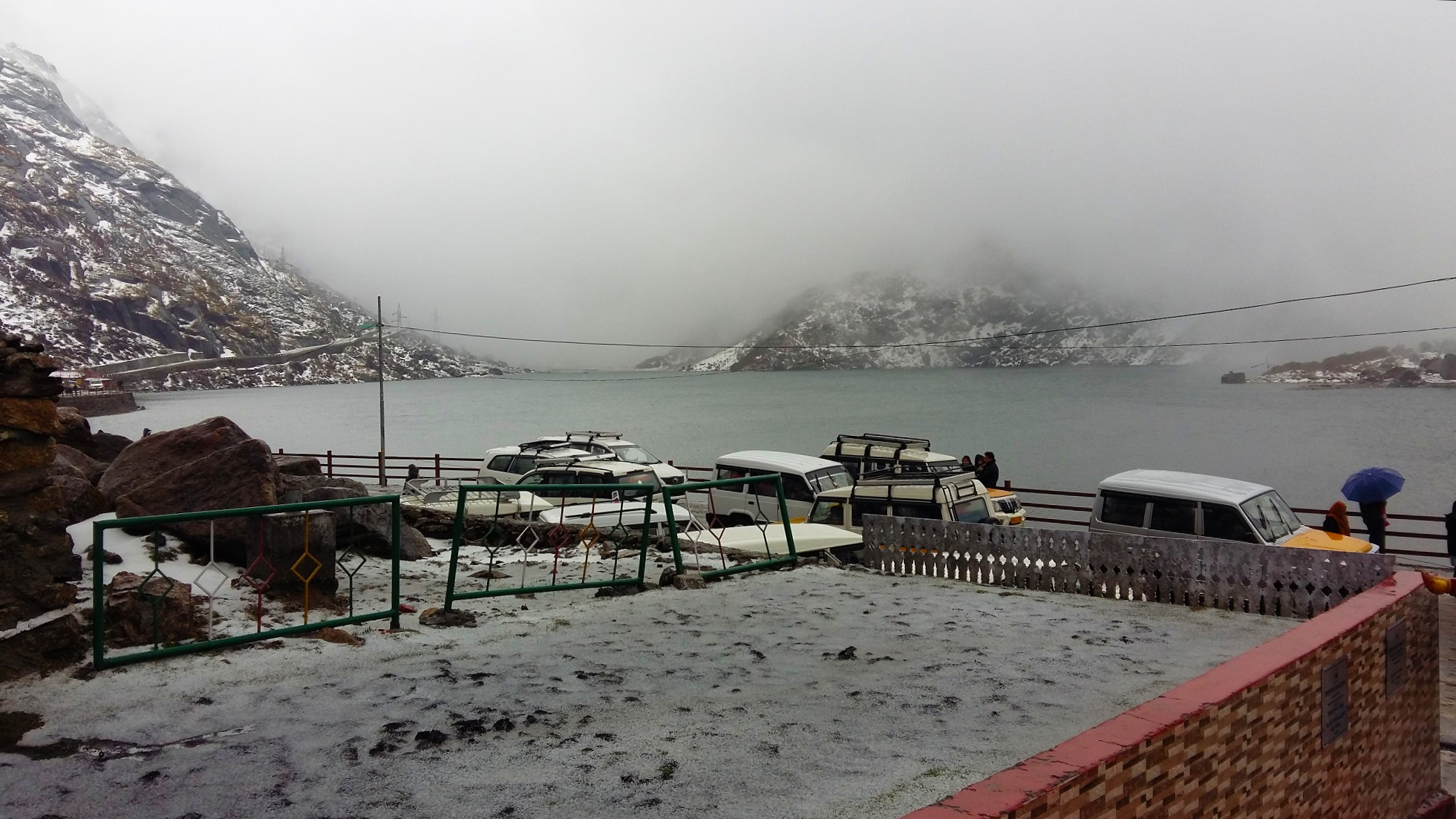 All grey and rippled by the wind and the rain, and surrounded by snow covered mountains on all sides, this sight was so totally worth the crazy drive to get here.

We rushed to take pictures and enjoy the view before it got too clouded again. The hail was falling more intensely, and I was thrilled to eat it. 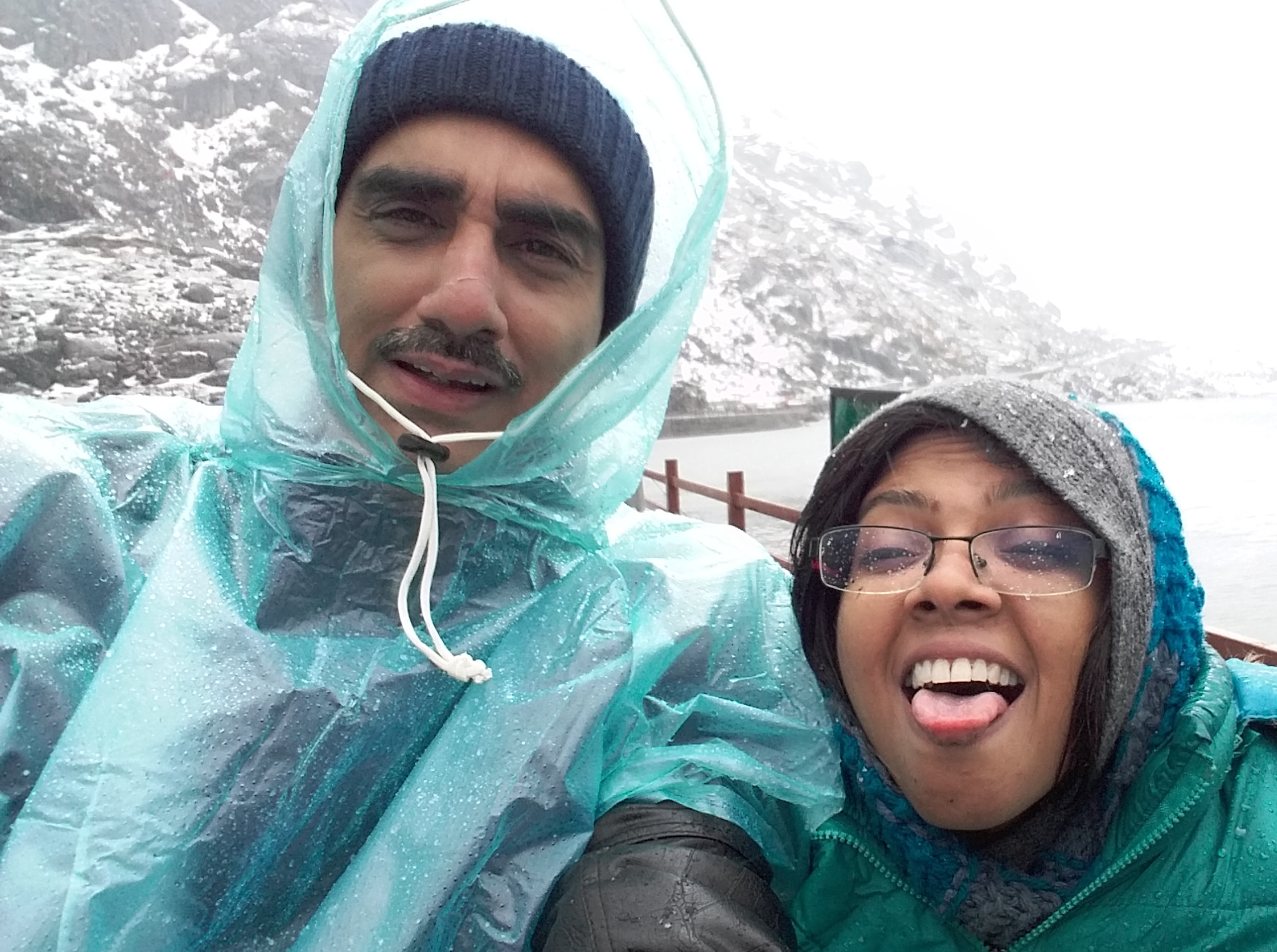 We now noticed a lot more things about the lake. The yaks, for instance, were a permanent fixture for joyrides around the lake, but earlier, we couldn’t see them at all. Now, that things were clearer, we had to suffer from the constant harassment of the yak owners for a yak ride.

I also noticed that this part of the lake had a railing. Thank God, I thought, there was a way to prevent us from enjoying the lake in a different way.

I’m assuming that by “Don’t throw anything into the lake,” the authorities also include our physical selves that might inadvertently or deliberately slip in.

All the vehicles were turning back from this point. I was terribly disappointed not to go ahead, but there seemed no other option. Our driver had also seemed quite frightened and keen to get back from here quickly. Yet, I can,t help but wonder; what if we had tried to go a little ahead at least. Might we have experienced actual snowfall?

Having stored the image of the lake in my mind, I reluctantly got back into our vehicle and we set back off to Gangtok, seeing these snow-chains on all the army trucks that passed us.

There was a brief period of the drive down, where we could see something around us. We saw lots of people playing in the snow by the roadside, that even the kid wanted to get messy in.

Waterfalls were at every turn and not gentle calm ones of North Sikkim. These were tall and angry falls roaring down under the force of the rain.

We got a very short-lived glimpse of the crazy roads we had driven on, on the way up.

The driver kept muttering that there was a risk of a landslide. He really wasn’t very reassuring. There were lots of places where the traffic came to a standstill and each time the driver said that the road must be closed. And each time, it was an army convoy. Thankfully.

I could see barren mountains with sharp sides and drops. The road was chiseled out in the edge of very steep mountains. Any fall from the road at this level would be fatal for sure. Hmmmmm. The thought was as reassuring as my driver. Surprisingly, there were no prayer flags on this route or maybe I couldn’t see them. I don’t know. But at some point, I could see a temple by the roadside and felt marginally reassured.

Soon we reached the place where we’d borrowed the jackets. It was chilly now and we were hungry. The warm room and the delicious smell of Maggi made us sit down for Maggi, tea and biscuits.

There was a handsome dog about the shop and happily, he was fed the biscuits. There were yaks loitering about on the road, and guess what selfie-king did? Posed with an untamed unclaimed yak! Selfie-emperor! 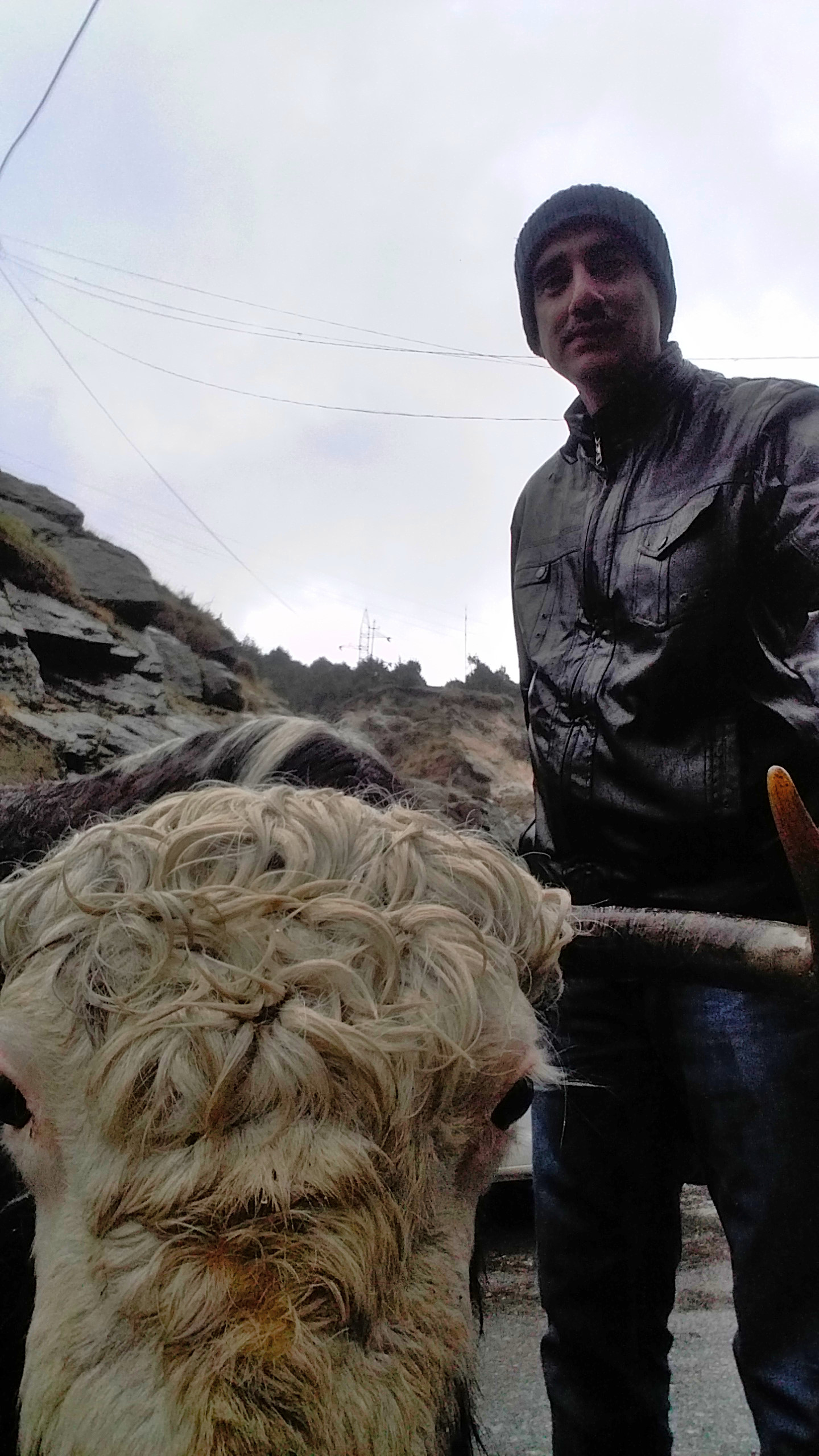 It didn’t stay clear for much longer though. As we descended further, the fog blew into the valley again, quickening my heart rate once more.

Reach we did safely, but this surely was a drive to remember. Changu lake sure looks great in good weather, with all the snow-covered mountains around, sloping down to the small lake ( according to all the blogs I read), but there is a different sort of magic to what we experienced on this day. We had seen clear skies at Yumthang and Gurudongmar, and fog along the way, but to experience this rain and hail was something else. And I am so glad we did.

2 thoughts on “Changu Lake, Sikkim, and an aborted attempt to reach Nathu-La pass”